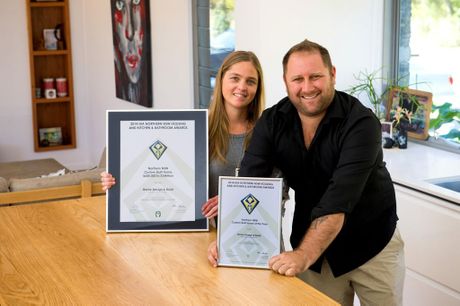 Posted at 13:29h in News by nicheadmin 0 Comments
0 Likes
Share

We are very thankful for the generous spread as Niche Featured in the Coffs Coast Advertiser recognising our recent win at the HIA awards along with other award winning builders.

PROOF the Coffs Coast is home to some of the most talented builders and designers in the region has never been more apparent.

“I really wasn’t expecting anything to be honest,” Mr Philippidis said.

“To take out all three categories was pretty great.”

Nathan Whitlock and Shelley Brauer, of Niche Design and Build, were ecstatic to take out the Custom Built Home $600,000 – $1 million for their home in Emerald Beach.

“It was definitely a surprise to win,” Ms Brauer said.

Congratulating all the winners on such an outstanding achievement, HIA’s NSW executive director David Bare said the awards were an excellent display of the housing industry’s capacity, innovation and resilience in regional areas of NSW.

“It is encouraging to see that in challenging market conditions, HIA’s builders and designers have maintained their commitment to excellence,’ Mr Bare said.

“The calibre of entries this year shows the strong support for these awards.” 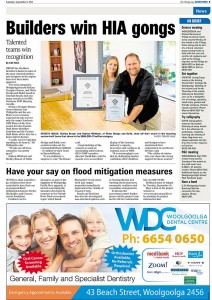